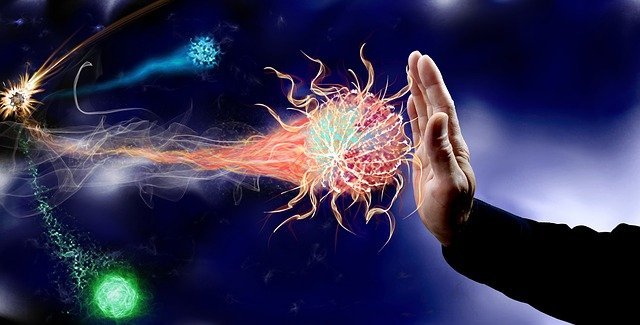 Here are some examples that show a link between autoimmune disease and a possible higher risk of cancer.

Rheumatoid arthritis is an inflammatory disease that causes painful arthritis.

However, it can also cause heart and breathing problems.

People with rheumatoid arthritis have a slightly increased risk of some types of cancer, including lung cancer.

If you have rheumatoid arthritis and smoke, you have a 40% higher risk of developing lung cancer than those who smoke but have no disease, according to the Arthritis Foundation.

This higher risk may be due to chronic inflammation – a known cause of cancer risk – that occurs in people with rheumatoid arthritis.

At the same time, people who smoke are at higher risk for arthritis and lung cancer, Bass explained.

This may be part of the environmental link between rheumatoid arthritis and lung cancer, with potential genetic factors playing a role.

Sjögren’s syndrome is an autoimmune disease that is often associated with dry eyes and dry mouth.

You can get Sjogren’s disease on its own, or you can have it secondary to another autoimmune disease, such as lupus or rheumatoid arthritis.

Like rheumatoid arthritis, Sjögren’s disease can affect other parts of your body outside the eyes and mouth, such as the kidneys and lungs.

People with Sjögren’s disease are 7 to 19 times more likely to have lymphoma, a type of cancer that affects the lymph nodes.

Our lymph nodes are part of our body’s system, which filters out harmful substances.

Lymphoma, which occurs when you have Sjögren’s syndrome, is more likely to occur in your salivary glands, the part of the body that is most affected by this particular autoimmune disease.

The lymphoma that appears is usually easy to treat, according to the Sjögren Syndrome Foundation.

Vasculitis and bladder cancer
Vasculitis is a word used to describe some rare autoimmune conditions associated with inflammation of the blood vessels.

A drug called cyclophosphamide can be used in severe cases.

This medicine has a certain risk of developing bladder and other cancers.

Cyclophosphamide is an immunosuppressant.

This means that it is a medicine that works to weaken the immune system’s response.

Those with severe vasculitis who take cyclophosphamide may survive treatment, but will later develop leukemia/lymphoma or bladder cancer.

The risk is related to how long the medicine is taken and at what dose.

The risk of bladder cancer also appears to be higher when cyclophosphamide is administered orally daily.

A study by the National Institutes of Health in 145 patients with Wegener’s granulomatosis (a type of vasculitis) treated with diurnal cyclophosphamide found that 6% had developed bladder cancer.

In patients followed up to 15 years of age, the planned incidence of bladder cancer was up to 16%.

Here are some more examples:

How can you change your cancer treatment if you have an autoimmune disease?

If you have an autoimmune disease, are you receiving normal treatment if you have cancer?

Chemotherapy is usually given.

Rheumatologists, doctors who treat many autoimmune diseases and oncologists continue to work in this area.

In general, some autoimmune-type side effects – such as pain, inflammation, or flu-like symptoms – are expected with immunotherapy, and experts say it appears to be a positive predictor of survival because it suggests that the immune system is activated.

For example, more than 80% of people without an autoimmune disease will also develop the autoimmune effects of immunotherapy.

A person with an autoimmune disease who develops cancer may or may not continue to take their autoimmune treatment while receiving immunotherapy.

It depends on the individual, the medication used, and the presence of the disease.

If you have cancer, it is important that your oncologist contacts your rheumatologist or another specialist who is monitoring your autoimmune disease.

Rheumatologists often turn to an oncologist after cancer treatment to ask about appropriate changes in the treatment of autoimmune diseases.

For example, a medicine called methotrexate (used in some cancers and autoimmune diseases) and a group of medicines called tumor necrosis factor inhibitors (also used in many autoimmune diseases) may not be appropriate because they may contribute to relapses in cancer or another cancer.

The results of immunotherapy are less well known in rarer autoimmune diseases.

At this point, the risks and benefits of each patient need to be weighed individually.